…Kasbahs and Camels is the name of the tour we are about to embark on… sounds rather exotic doesn’t it! 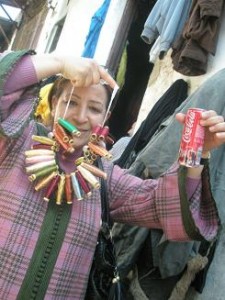 Fez, Morocco; Hakima, our guide around the Medina

In fact it commences tomorrow morning, which is why we are flying out of Fez 19:45 this evening, to Ouarzazate via Casablanca. That will be an interesting flight I’m sure.

We spent all of yesterday lost in the medina, with our fabulous guide Hakima (so not really lost!). We were however offered all the camels in the Sahara for daughter, and as many Moroccan carpets we wanted… blimey!

We did shopping and eating, battled for path space with donkeys, and were called to prayer 5 times… as you do in this mysterious place full of nooks and crannies. 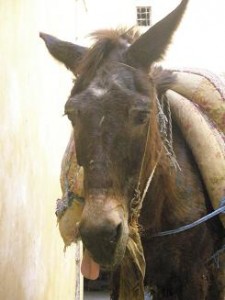 Today has been spent on chores, repacking, and performance. Yes that’s right.

The girls ended up performing for all guests of the riad, miming and moving to ‘Words’ by Kate Miller-Heidke. Suffice to say they were a hit. Click on below to enjoy!

As Easter doesn’t really get a look in here! and who knows whether internet coverage features in the Atlas Mountains and the Sahara, we bid you all a fab Easter break and will report in again when next possible.

This is straight from the Kasbahs and Camels Family Adventures dossier…

The tiny villages which lie in the valleys and cling to the flanks of the Anti-Atlas Mountains are inhabited by the hardy and hospitable Berber people. The few rough tracks which venture through this massive rock barrier eventually dissolve away into the Sahara sands beyond, bringing a final end to all attempts at a settled existence.

The chief objectives of this exciting trip are to enjoy the amazing contrasts of Southern Morocco. From exploring the fortified kasbahs and ksours of the Draa Valley, palm-fringed desert oases and the wilderness of the Sahara, to the mountainous interior and the coast.
Everywhere there is scenery of exceptional beauty.

We visit the ancient walled town of Marrakech, camp for a night in the desert, and stay in simple accommodation in a Berber village during our time in the Amein Valley – a unique experience not easily forgotten.

and a select few of our photos… we have soooo many more! 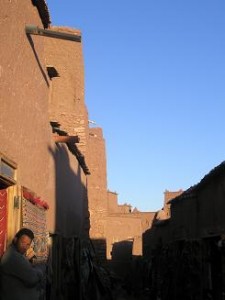 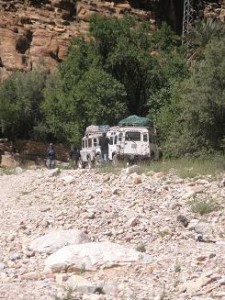 Morocco; talk about a bumpy ride along the AkkaValley! 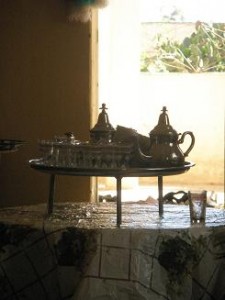 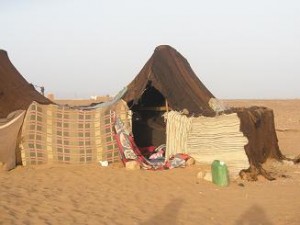 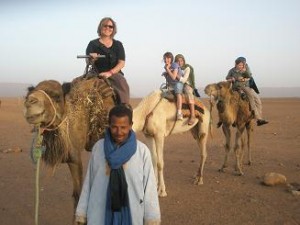 Morocco, TinfouDunes; How Cute are We on the Camels! 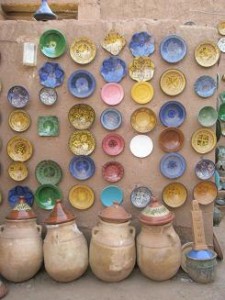 Zagora,Morocco; the Wall of Plates at the Potters

What fun we had today.
Apparently I`m `tough like Berber` in relation to negotiating, and had a really good time doing it too I must say. Although I did need to spend some time discussing the fine art of negotiating with daughter because at some points she decided to bid against me to secure the booty! hhhhmmmmm. All good fun though.

Our plan is to have all present shopping done by the time we leave Morocco, where costs are considerably more tolerable than Europe {especially when tough like Berber bartering comes into play!}. We are only three gifts short of our goal, and we still have all day tomorrow to go. 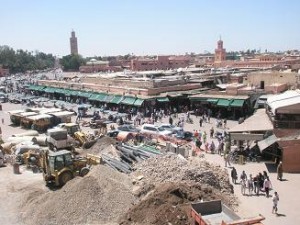 We have just returned from our final dinner with our Moroccan tour group. Given it is Karstens birthday today, Mohamed {tour main man} and I organised a cake and gift and surprised him, and everyone else, with it at the restaurant. It worked a treat! hip hip hoorah. 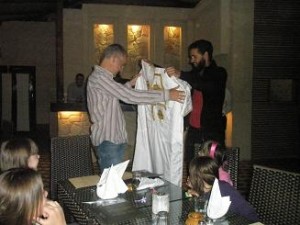 We`ve had a grand old time. We leave the tour hotel in the morning; where we move to our last riad for one night, which is based in the medina. Then it`s off to Barcelona for our last three days in Spain, where we leave our travel buddies {the Hornes} and head to Lisbon, Portugal. Before that though, we are going to the Barcelona vs. Valencia football {soccer} game Tuesday night. That should be fun.

I have to admit that I will be very sad to leave Morocco, and so will daughter. We have had such a delightful introduction to the place, and of course, now have `new best friends` in both Fez and Marrakech. It will definitely be sad to say goodbye. Especially after a good dose of banter again tomorrow…
We would really like to return.

ps. Text messaging is still not working, but hopefully it will back on track again once we return to Spain.

I am sitting in the foyer of the Hotel Les Armandiers, Trafout, at the base of the Ante Atlas Mountains, “borrowing” their wifi! as you do…

We have just spent 24 hours high in the mountains, in a traditional Berber village. What an experience! Definitely a highlight to date. Even though the accommodation and toilette were most basic (think yoga mats and starting blocks!), the people and climbing a wee small part of the mountains more than compensated. Our guide, Mohamed, is also Berber and as lovely as all we’ve met, so its been delightful and a privilege. We love Morocco. 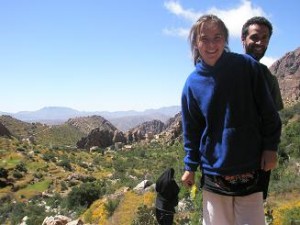 One lady who stood out today as the entrepreneurial mother kind was Hatudo. She took us on an extended tour of the village, invited us for mint tea, and drew henna creations on our arms, mostly with baby on breast! All for approx $20 AUD per person, equivalent to a months wages in local currency Dirham. And she, and the little ones, are also gorgeous. 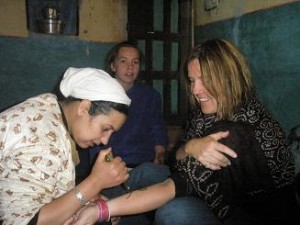 We love the Berber spirit and their generally happy and optimistic outlook on life. All credit to them we say. We have much to appreciate, and learn, through their perspective.

Or as Jimmy Buffet sings about…
“Changing Latitudes Changes Attitudes” (thanks Karsten)
Amen!

ps. Not much shopping to be had so far, and not without trying! The kaftans are not pushing my buttons either unfortunately. Maybe we’ll have better luck in Marrakech… hope so.

pps. FYI… I’m receiving text messages. I can send apparently, but not receive. If you’re expecting a response, hopefully it will happen once we return to Barcelona in a few days.

Well, wasn’t yesterday eventful!
It all started out as an ordinary traveling day on our adventure & then something happened. Not sure what, but it manifested like this…

We left in plenty of time to get through customs in Gibraltar, & made our way to Algeciras Spain to drop off the car (that Karsten had so safely driven for the last 10 days). Stress levels did rise when the Avis office could not be found, but we made the ferry bound for Tanger Morocco in plenty of time, as it turned out.

We were aiming for the 11am train to Fez, which Karsten had trouble booking & had still not managed to do despite best efforts. Whilst we gained two hours crossing 21kms of straits, we knew that gave us plenty of time… until the ferry had to tread water away from the port where it needed to dock, for at least 45mins. Suffice to say we missed the train. Welcome to Morocco, and Africa!

5 hours later, after sitting in a freezing new train station, drinking cups of English Tea, we finally boarded that train. Part of the trip was that we changed trains at Siri Kasem, 3 hours into the journey. Once arrived, we not only got out the wrong side of the train, onto the wrong platform, it was dark, dusty, & dirt. Traveling in ‘first class’ meant we were in the last carriage, furthest fromm the driver… go figure!

Anyway, we waited patiently for approx 30mins, & along came the train. We had almost loaded on, when the train started moving, resulting in myself, and three of my new best friends, still on the platform!! Oh my goodness.

As you can imagine, we started screaming & making such a racket, that all the station chaps still on the platform thought someone was under the train! Yes, it did stop & the remaining four managed to get on. By this stage, daughter was in tears, & we were over it, as you can imagine.

One chap who came to our rescue, his name? Abdul. He befriended us & offered to help us with a cab etc once we arrived tn Fez. So we let him as we were all buggered by this stage. After organising taxi’s for us, we got to tne main gate of the medina, & our new best friend got himself into a tiff, which almost culminated into a full scale fight; blimey. By this stage it was 10:30’ish, and we’d been up since 4:30am local time.

So we did what all good freedom fighters do, & slunk away to meet our hosts who were guiding us to the riad in the heart of the medina. We could not get there quick enough and once there we realized why…talk about an oasis in the desert, this place is like nothing else. Dar Safferine http://www.darsafferine.com is a completely restored riad (guesthouse)in traditional style. Very palatial, and oh so inviting. Praise the Lord, we made it! 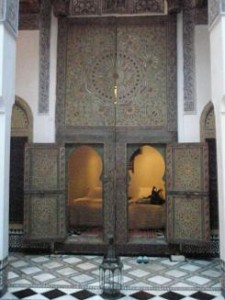 After a mosquito buzzing filled sleep, and prayer time starting @ 4:20’ish, a fabulous night rest had by all…

Today, one of our conquests was trying to get our ‘smalls’ laundered. Even that was a special experience. As a consequence we did our own washer woman impersonation, on the roof top of the riad, with a bucket for each family. A fun game the whole family can play!! 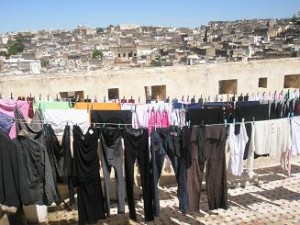 Washing on the roof

Tomorrow we’re off exploring the medina with our guide, Hakima. Stay tuned for our next tale in the adventure that is unfolding wonderfully well!