Actually, it all started at Botswana Airport… 15 of us check in to leave from Maun to fly to Cape Town, via Johannesburg, only 2 of us had our tickets cancelled. And yes you guessed it, it was us! How could this be? we asked the airport manager blamed our travel agent, but of course our travel agent was travelling with us(!) so they were able to work it out. Got us all a little nervous but was eventually all sorted, with the next leg (Johannesburg to CapeTown) confirmed as well. 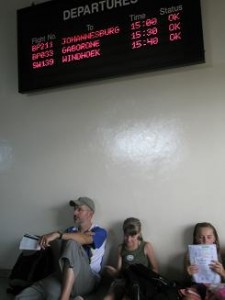 It had more to do with the new e-ticketing system than anything else. However due to this, and a number of other factors where everything else at the airport was being run manually, we did end up leaving approximately an hour late… but of course when in holiday mode, who pays attention to such detail!!

Suffice to say, we were rudely awakened to this fact once arriving at Johannesburg airport after collecting luggage and getting through immigration etc, we had 5 minutes to get on our flight! well that’s not exactly right, we had realistically missed the flight… oh oooohhhh. This is where playing dumb (don’t say anything!…) and putting on your Amzing Race hat became very useful.

We managed to jump all the queues (they long and many) and get to the front. We managed to get on the next flight with the help of a fabulous check-in woman at the airport. We managed to get out of paying penalty rates at the Ticketing Desk (they didn’t ask and we didn’t offer). We managed to have our luggage checked through before the new tickets were issued which meant we had to get tickets for the flight. Once all was sorted, we then had to run to the flight with 10 minutes to spare. So it was literally running through airport, bouncing past people and things, over and under barriers and down stairs…. all to get to the last transit bus to the flight.

And YES we made it. All good fun really…
Cape Town – we were on our way, and only 20 minutes later.

We walked into the foyer of the Mount Nelson and knew we were in the right place!

The Mount Nelson; the Raffles Hotel Singapore, the Victoria Falls Hotel Zimbabwe equivalent of Southern Africa. Rather Salubrious I must say. 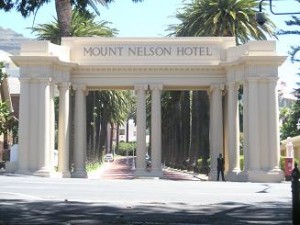 Tea on the Terrace, with a buffet to die for… savoury and sweet. Cucumber sandwiches; smoked salmon sandwiches; mini tarts and quiches; crumbed mushrooms;… and then onto the petite fours, rows and rows of them; tortes and cheesecakes; cakes and scones; and of course, cheese and crackers. 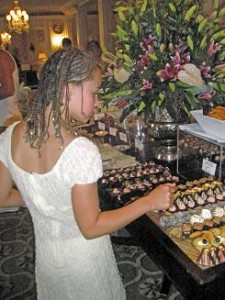 The priceless comment of the day was when the little one says in a rather loud’ish voice “this cheesecake is not as good as grandma’s!”, and you know what, she is right.

A rather pleasant way to spend our last day in CapeTown. Now its repacking time (oh ooohhh) as we are off to Strand to spend 4 days lounging on the beach and generally winding down and energising up for the long haul home.

ah such is life!

Well if you wanted a better way to lounge after the adventure that was the safari truck then I think you would have trouble finding much better! The Strand Pavilion, in Strand 30km out of Cape Town is built over the water, literally! The waves lap under your bedroom window so it’s the perfect lullaby for that delightful slumber. 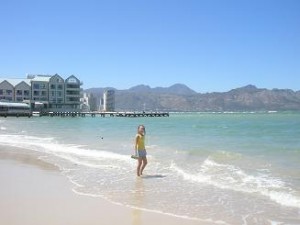 And wasn’t RandR called for? We were plumb tuckered out so recharging the batteries for the long haul home was certainly well received, otherwise those flights could have been really ugly… well on the inside at least anyway.

Two of our new best friends from the safari truck came and joined us for a few days, bringing along good times and some delicious wines from the local area. Very nice indeedy. 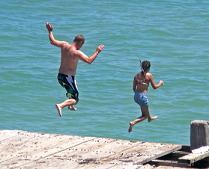 Now time to get the head around packing, especially with the few new purchases that may not fit into the bags that we arrived with!
Anyway, we’ll manage something!!

A message from the girl: “I love Africa!”
I guess that sums it up for both of us really…