We arrived in Barcelona yesterday after two fabulous weeks in Morocco. Spent a fortune; and definitely intend to return. 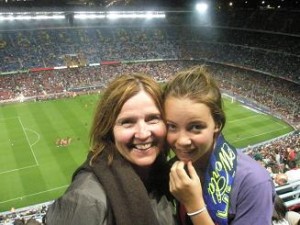 Barcelona is also a fab spot. Last night climaxed with the FC Barcelona vs Sevilla game, @ Estadi Camp Nou Barcelona.. The two teams are #1 and #3 in their league, and FCB feature the #1 player in the world – Messi. Mind you, he didn’t come on. The team had managed to goal 4 times to nil, so extra flair wasn’t really required. The atmosphere was a hoot, sitting up in the gods with 80,000 of our closest friends!

Today is the Horne’s last day. Very sad to be saying goodbye to them too. It’s been an absolute pleasure, and look forward to our next adventure already! (with Peru and Bolivia on the agenda for 2010-11).

It’s more Barcelona, here we come!
Then we take on Lisbon Portugal…

no not really, couldn´t get the song out of my head though!

We have spent today lunching al fresco, in the delightful sunshine, admiring the view of the oldest bull ring, and then spending time not only in it, but on it.

Whilst I didn´t think the whole bull fighting thing would be remotely interesting… I was wrong, it was fascinating. The tradition, the history, the atmosphere, the colour were all palpable, even though the first bull fight does not start in Ronda until the 10th of April for this year. There is a whole season of bull fighting from then on. As to who lasts and is able to fill pending dates on the calendar depends on the bull, pretty much! 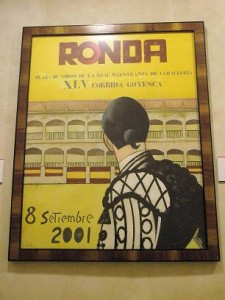 We had also spent time on a guided tour around the bull ring in Seville, however the Ronda one is older by 13 years, but who´s counting when we´re talking centuries! And we were able to walk on the Ronda one, which made it even more tantalising. 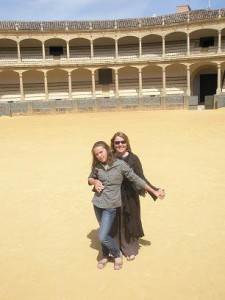 The daughter pretended to be a matador! (as you do) and had a wee crowd in the stands shouting “ole!”… rather humorous really 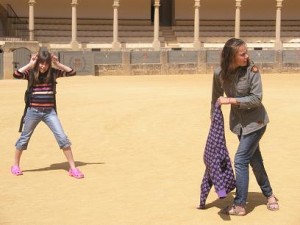 Interestingly enough, this year on the Seville program, there features one female (whoa!) and a non-Spaniard (German/French). Who´d have thought a form of globalisation and affirmative action could effect such a stalwart of tradition. Of course the other begging question is, why would you want to? 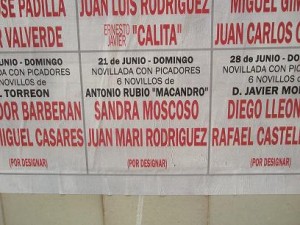 We continued to dawdle atop of the Puento Nuevo… no mean feat in bridge building I can assure you. 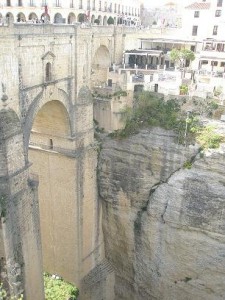 The other big deal happening both here, and in Seville (in fact I think its happening all over Spain), is the “Semena Santa“. Huge processions and festivities around Palm Sunday (of the Christian persuasion). A very impressive sight, although I don´t get it, but then I didn´t try to hard…click on this link for details http://www.sevillaonline.es/english/seville-city-centre/semana-santa_holy-week.htm

Tomorrow we´re off to Gibraltar, passports at the ready.
One night there, and then onto Morocco. Not sure what the internet access will be like there, we´ll just have to wait and see…

We´re currently sitting in a bar (and yes it´s 12:35) in Ronda www.enfrentearte.com typing to my little hearts content, waiting for our rooms to be finished cleaning. We got here a little earlier than planned, from Seville. Pity we weren´t here longer than one night as everything is “gracias”, free, nada, nil cost, including the red wine… blimey! However given that Karsten and Michelle are tea-totallers, it will be party time for me on my pat malone, or in Spanish, on my papaloma!!

Our room is bright red, tomato red… is that good for dreaming? I can´t remember. Or maybe the imaginative dreams come from the red wine instead!

Seville was a great place, we really enjoyed it. It´s almost like the further south we go, the more we are starting to warm to Spain, in general. Whilst the early places are amazing, they haven´t been pushing quite the right buttons as I had imagined. However, that is all shifting…

The hotel we stayed in Seville, “hotel Amadeus” www.hotelamadeussevilla.com, was a rather classy establishment. In our deluxe suite, we had a shower that doubled as a spa and sauna; even though we felt like we were in a space capsule when standing in it. It did have a little dicky seat so that was novel, if nothing else. 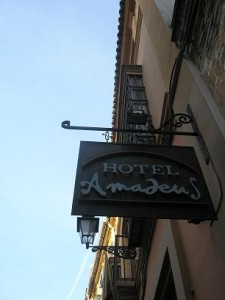 As you may have surmised, the hotel does have a musical connection. But only from the viewpoint of the owner family having a strong musical pedigree, which enabled the instruments to not only decorate the hotel, it allowed guests to avail of them, at any time. Suffice to say, daughter did voila practice, and guitar and piano (I have video to prove it), and even the harp… school will be proud!! 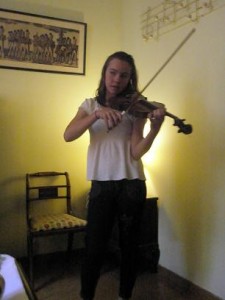 Another cathedral (although good for taking aerial shots from), another palace, and more shops visited, although now much is starting to blend into one another, fashion and frescos alike! 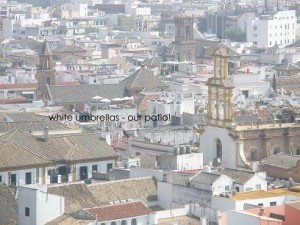 Must be time for that first glass of red now surely…
no idea what any of the grape types are, but then I guess that´s half the fun!

Ola!
We survived the snow… 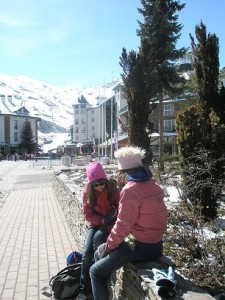 We have spent today swanning around Cordoba, and mainly being gobsmacked at the majestic Mezquita. Originally the Basilica of San Vincente, it then became a Mosque, only to be returned to a Cathedral in 1236. Pretty damn impressive really… 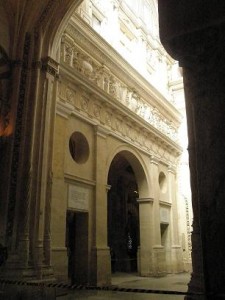 After that, it´s been mainly loitering with intent… to shop mainly. We´ve found an amazing label called ¨Desigual¨ from Barcelona we think, really colourful and edgy. www.desigual.com The first I must say, which has been a little surprising, that is after the world famous ¨Zara¨ of course! www.zara.com

Daughter is doing really really well. She is such a seasoned traveller now, it´s wonderful watching her practice and master all the stuff you need to do whilst doing the travelling thing. Today it was about carrying ones smalls to the laundrette, working out the cost and pick up arrangments. She´s also picking up a little Spanish along the way. One of our favourites is ¨una mas¨, meaning ¨one more¨… saves us having to repeat things, especially food orders!!

We have been getting into the Tapas, and really enjoying it. Although daughter does keep reminding us about what we´re eating and how cruel we are ie last night it was lamb chops, and she was in tears over the ordering of such a thing. So she stuck to her croquettes, and spanish meatballs and left the rest of us heathens to handle the rest. The tears at the dinner table are a bit head turning though!

We leave Cordoba tomorrow and head for Seville.
No doubt we´ll have much more to report then.
Adios… 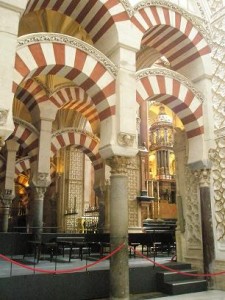 Ola!
It´s bucketing rain, it´s 9oC (yes we´re feeling the cold)
Not only that, we´re living in a cave! www.el-abanico.com/ingles.html… and we´re loving it. 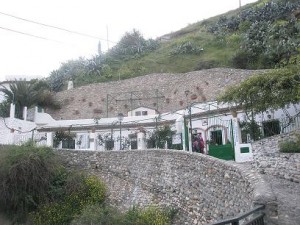 Have spent today swanning around the Alhambra Palace, which is rather impressive. However the highlight was, when standing in the Palace of Carlos V (a colosseum type construction with amazing acoustics), a rather large English tourist steps into the middle and rips out a rendition of a classic operatic number, and completely blew us all away…it brought a tear to your eye, seriously beautiful. And then he and his fat mates moved on and went back to being geysers…who´d have thought! 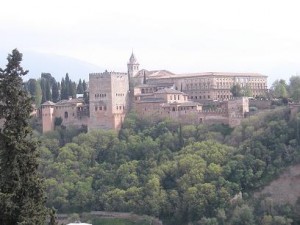 Daughter has such a story brewing in her head that I can´t wait until she gets it down on paper. She may even share it with you all, we´ll see. This is now a book in progress… stay tuned for publishing details!

Off to the snow tomorrow. Sierra Nevada. Not sure what to expect (other than white stuff of course). The drive itself will be hairy enough given that this is the first time driving has been attempted, on the opposite side of the road, for some time. Couple that with roads unknown, mountains unknown and bends unknown… an adventure it could definitely turn into!!

Until next time, adios!!

p.s. phone is working now, so it´s full textíng ahead!